Many of the talks at the North American Congress for Conservation Biology, held in Madison, Wisconsin from July 17-20, have emphasized the need for scientists to better connect with public audiences. We need science communication that is accessible and accurate, making it valuable for scientists to be communicators whenever they can.

Twitter can help any scientist take on the role of communicator in a number of ways. For one, it provides opportunities to correct misinformation quickly. As example, Neil DeGrasse Tyson, the most followed scientist on Twitter, produced a minor uproar in March of 2016 by tweeting: If there were ever a species for which sex hurt, it surely went extinct long ago.

People well-versed in zoology recognized this statement as inaccurate and Tyson was corrected quickly by tweets from scientists and science communicators alike. 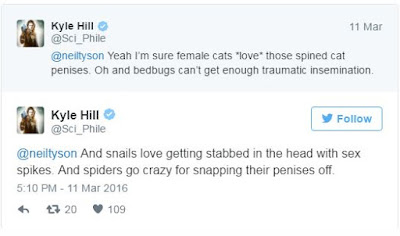 While this example is inconsequential, it shows how, through Twitter, incorrect information can be countered within hours, even minutes.

But Twitter is not only a place to counter misinformation. It also can help promote positive behavior change.  David Steen, a herpetologist I follow on Twitter, interacts frequently with his Twitter followers and encourages them to tweet photos of snakes they want identified. Along with his identifications, he urges people to be tolerant of snakes, to recognize that most aren’t dangerous, and he dissuades them from harming snakes.  Occasionally someone posts a tweet that shows Steen’s message is getting through and influencing his followers’ behavior.

A great benefit of Twitter is how it can bring scientists’ personalities, voices—and passion—into public dialogues.

Beyond countering misinformation and promoting behavior change, Twitter is useful for scientists as a communication medium because:
●    It disseminates information directly and rapidly.
●     It encourages succinctness.
●     It reaches a wide range of audiences, including the public, policy-makers, and the media. More than 60% of journalists use Twitter!
●     It’s free!

If you're new to Twitter, I suggest getting started by following your professional organizations. See what they’re tweeting and get to know the organizations and individuals they follow. You may want to follow them also. When you’re ready, jump into the conversation.

Bert, A. (2014). How to use social media for science — 3 views: Tips from science and journalism pros at the American Association for the Advancement of Science (AAAS) annual meeting. Retrieved from http://www.elsevier.com/connect/how-to-use-social-media-for-science

How journalists use social media:

Petersen, A. (2014, 6 May). Three charts that explain how U.S. journalists use social media. Retrieved from Washington Post blog http://www.washingtonpost.com/blogs/the-switch/wp/2014/05/06/three-charts-that-explain-how-u-s-journalists-use-social-media/

Posted by Francie Muraski-Stotz at 7:27 PM 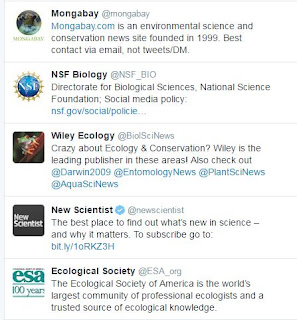